I got a Kindle Fire. Sue me. 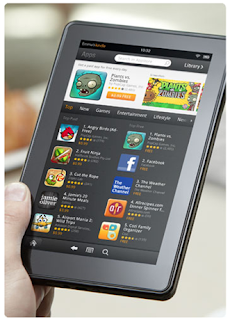 So, this week marked the arrival of my new Kindle Fire.

Yes, this means I now own an iPad, a Kindle with Special Offers, a Nook Simple Touch, and a Kindle Fire. Don't be hatin'.

In lieu of a full review, and because I've only had a few hours to really play around with the Kindle Fire so far, here are 5 first impressions.

1.) Great screen. Scrolling is a little too quick sometimes. Occasionally takes multiple taps to register a selection, which many reviewers have also complained about. Yet other times the screen is spry and ideally sensitive. So I'm hoping this is an issue a firmware update can fix.

2.) The interface is intuitive, but the carousel menu function, as well as much of the interface, needs some customization options. As it is, there really aren't any. Personally, I'd rather drop the whole carousel menu and go with an icon-based menu, like the iPad, iPhone and Nook. I know Amazon is just trying to be different here, but sometimes familiar is best. (Note to Amazon: Let me customize my Fire interface.)

3.) The Kindle Reader app is awesome. Books look great, read easy, and there's enough options to make me feel at home. I especially like the ability to tint the page background to a more neutral color, which minimizes the whole black-on-white contrast that seems to result in added eye strain. Good job, Amazon.

4.) The app Easy Installer is available from the official Amazon App Store, and Easy Installer allowed me to side-load the Barnes & Noble Nook reader app for Android. So, I now have access to both my Nook and my Kindle libraries on one device. This is a good thing. I understand Amazon might hesitate to make a Nook app "officially" available at the risk of losing book sales to B&N, but I imagine there are a lot of people like me who would be tempted to sell their Nook device if it meant having their entire e-book library easily accessible on one device, diminishing my need to own B&N's hardware. (Note to Amazon: take a hint!)

5.) The 7" screen size is just a smidge too small for magazines and comics. Don't get me wrong--they look great. And you can zoom as needed. But it shouldn't be needed. I think Apple had it right when they said 10" was the ideal tablet size. Still, if the document is specifically optimized for this screen size, it's gorgeous.

All-in-all, I'm very pleased with the Kindle Fire. It's lightweight and comfy in my hands. I found a great leather case for it. The Fire is agile and streams music and video from the cloud like a dream, which means I'm not concerned about the 8gb storage limit. Because I'm also an Amazon Prime member, I get all sorts of extras, like free streaming movies and TV shows. (The Fire is definitely awesome for Prime members.) And so far, no complaints about the quantity or quality of the apps available. Can't wait to explore the device some more!

Feel free to chime in with thoughts, criticisms, questions or comments.
Posted by Martin Kozicki at 9:38 PM 2 comments:

Back in the saddle. Still snarky.

After a long and trying summer, fraught with many dilemmas and chaotic events that only a family like mine can create, I'm finally seizing small moments of free time to write again.

So here's the revelation I came up with for my blog: I hate "blogging" in its formal sense. It's aggravating to feel pressured to write something awesome or substantive or poignant on a frequent basis. Also, I know that most of you don't care. You want dim sum. You want snacks. Or you want dessert. Nobody goes browsing the Internet for meat and potatoes. We like our content bite-sized. (Although, now that I think about it, you can make bite-sized meat and potatoes.)

From here on out, most of my blog posts, when they happen, will be more akin to a Facebook status update or a Google+ post: Short. To the point. Opinionated (always). And inviting comments.

For better or worse, this is my digital life. Welcome to it.

Now, I say "most" of my blog posts because I realize that there will be times when I just want to rant, rail or rave about something and will need the bailiwick that is my blog to do so.

Email ThisBlogThis!Share to TwitterShare to FacebookShare to Pinterest
Labels: Digital Life, Facebook, Google Plus, I Hate Blogging, If I Had A Horse I Would Name It Snarky, Mitch Hedberg, Stephen Colbert, Steve Jobs
Newer Posts Older Posts Home
Subscribe to: Posts (Atom)

Martin Kozicki
Husband. Father. Writer. I have been known to keep bees.